Champions Are Crowned, Fun Had By All In Revived Tennis Open

Tom Conrod follows through on his hit at the net as Joey Conrod stands in position during the Newtown Tennis Open at Dickinson Park on June 22. (Bee Photo, Hutchison) 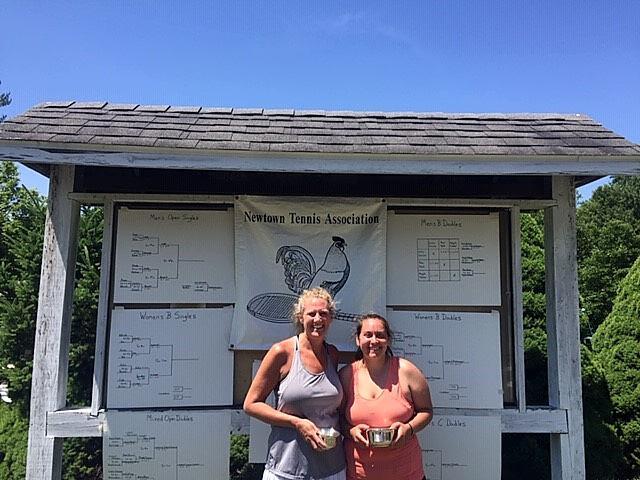 Women’s B singles runner-up is Kim Nyklicek, and the champ is Maxx Zimmer. (Brett Teolis photo) 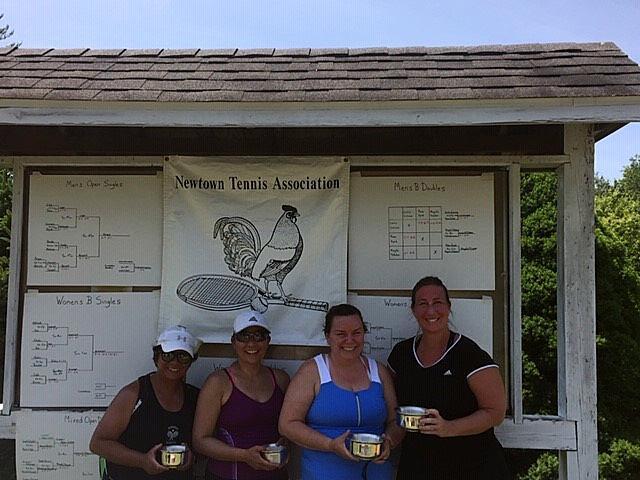 Women’s A doubles runner-up players are Marie Vongsouvahn and Lillian Hope, and the champs are Louise Scrivines and Cindy Mahoney. (Brett Teolis photo) 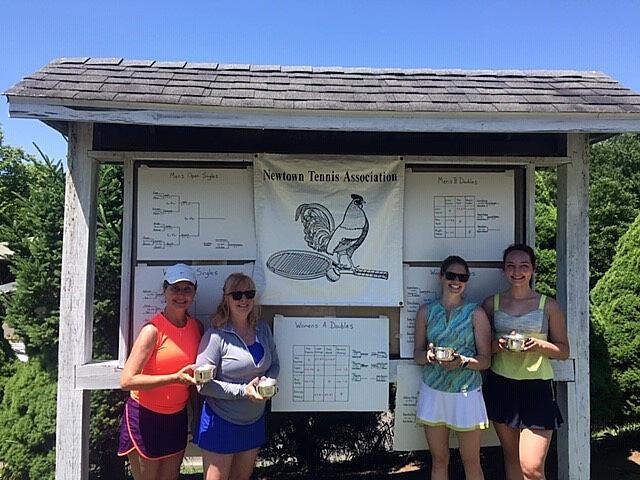 Women’s B doubles runner-up participants are Sylvia Islam and Karen Hanley, and the champs are Amy Krompinger and Meghan Logan. (Brett Teolis photo) 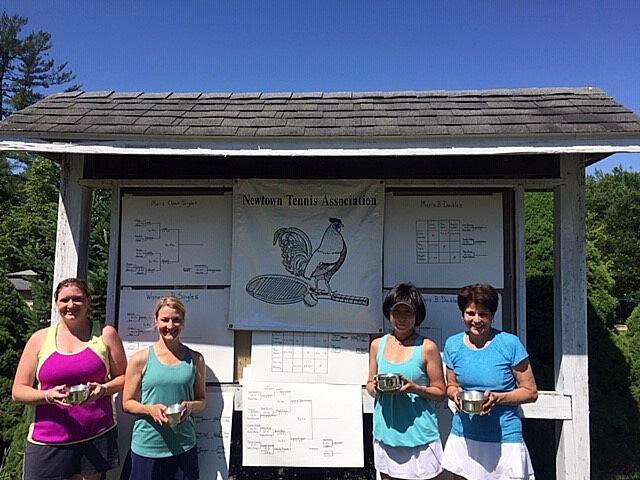 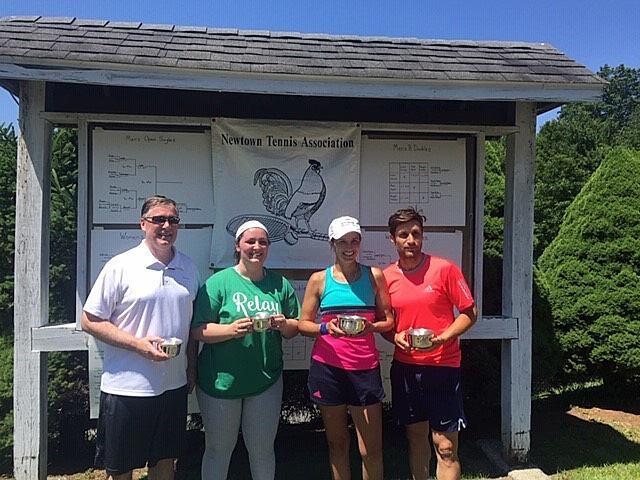 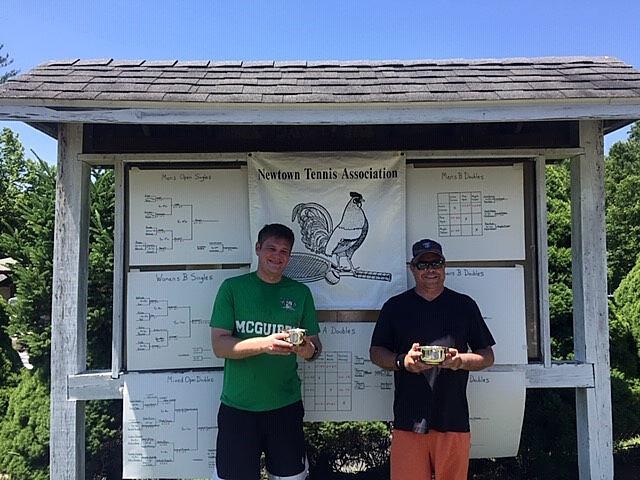 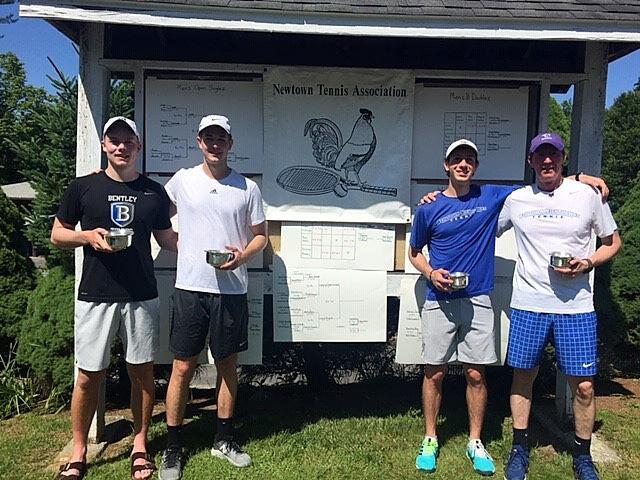 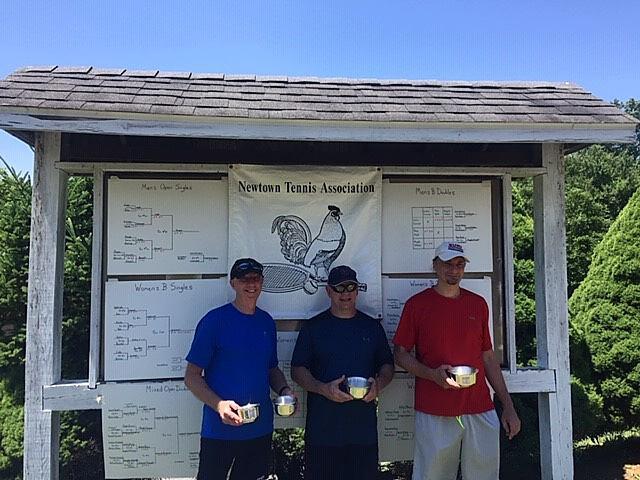 Men’s B doubles runner-up players are Wayne Curtis and Lou Luciano (not pictured), and the winners are Bill Mangillo and Arnaud Tolleter. (Brett Teolis photo) 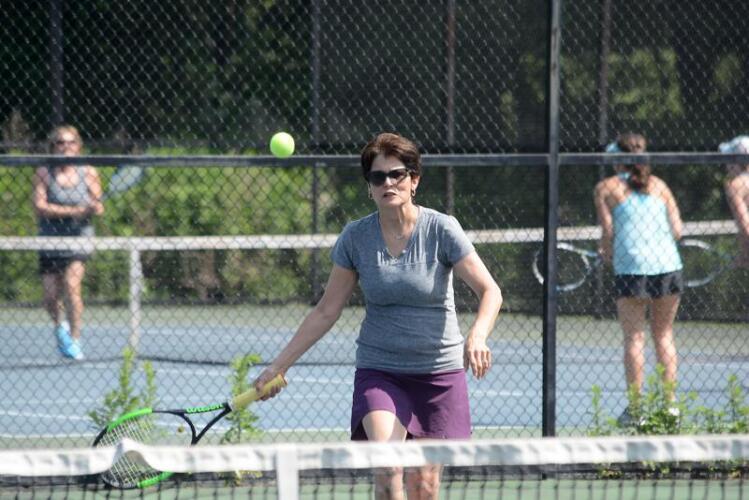 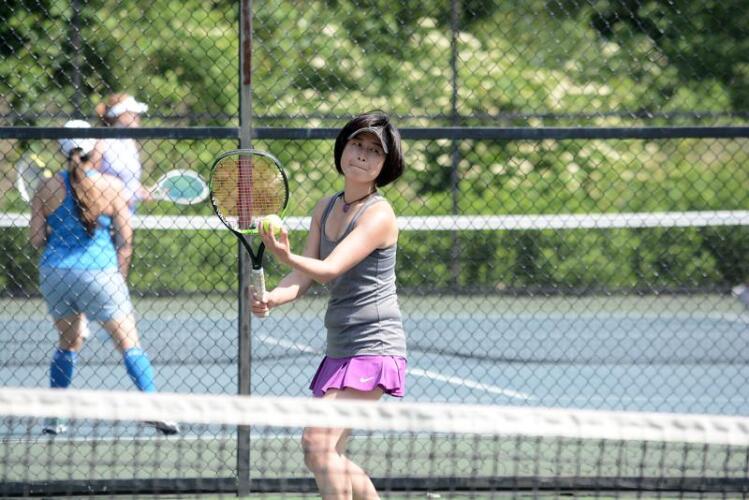 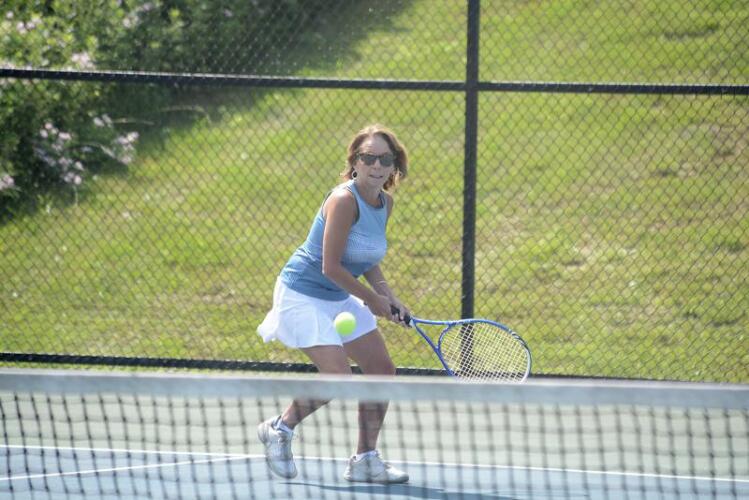 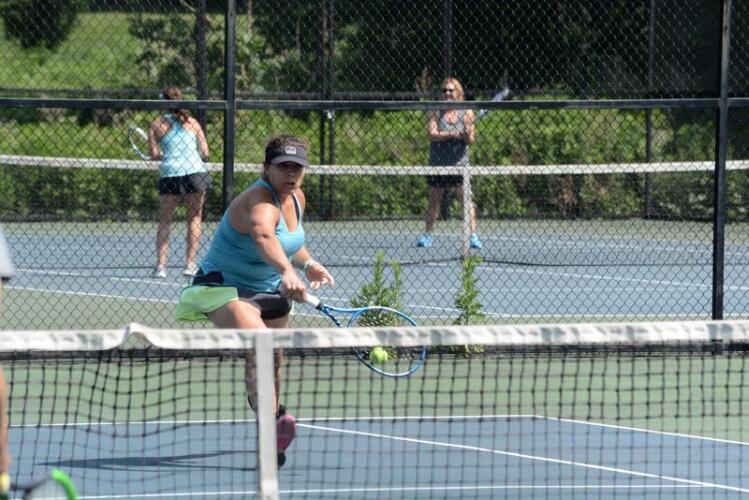 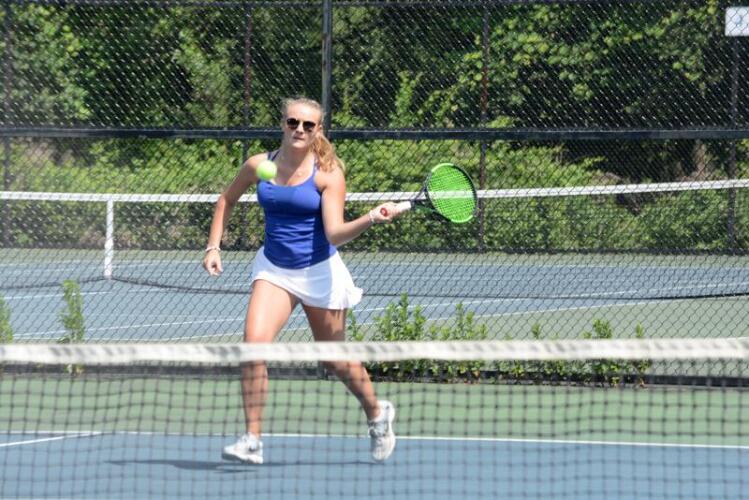 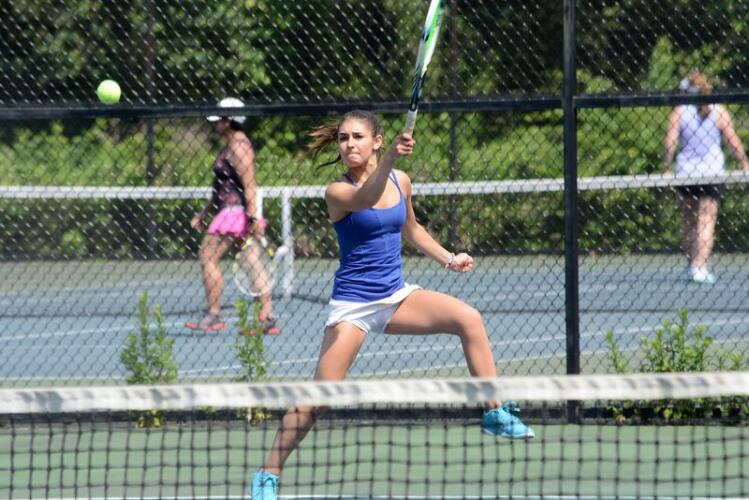 Amanda Berry follows through on her hit. (Bee Photo, Hutchison) 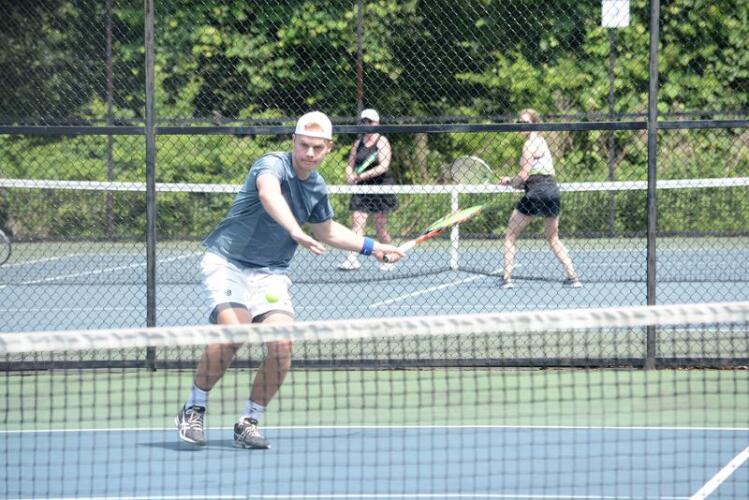 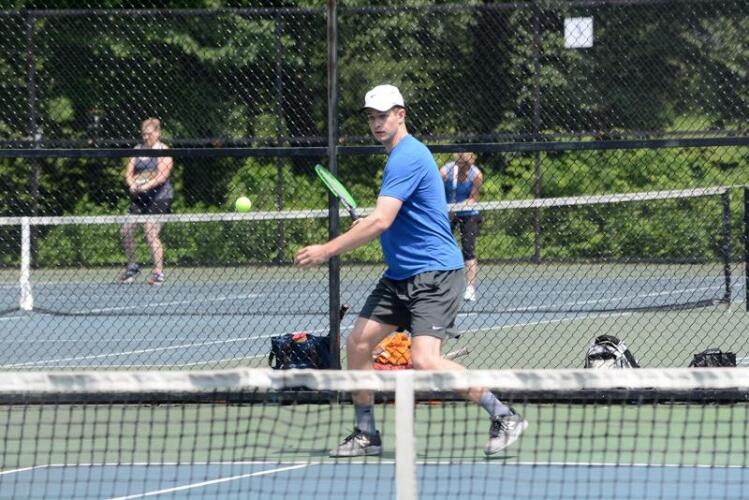 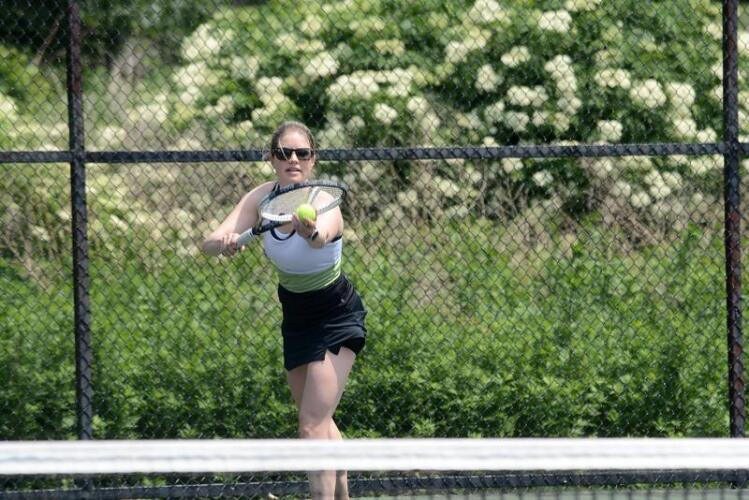 Amy Krompinger gets ready to put the ball in play. (Bee Photo, Hutchison) 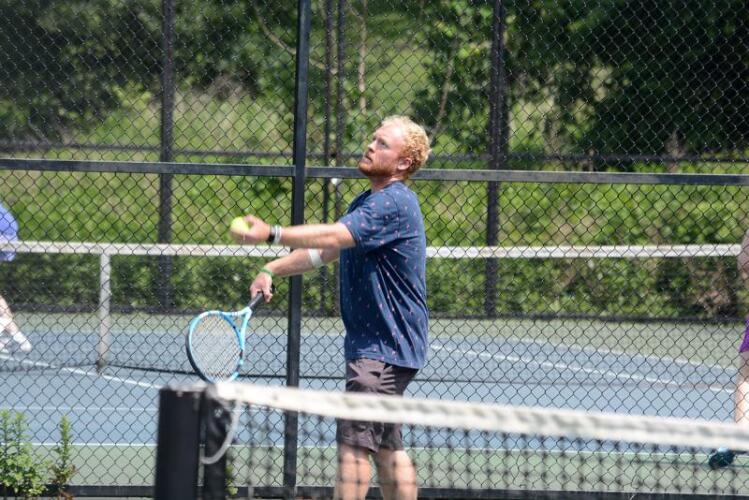 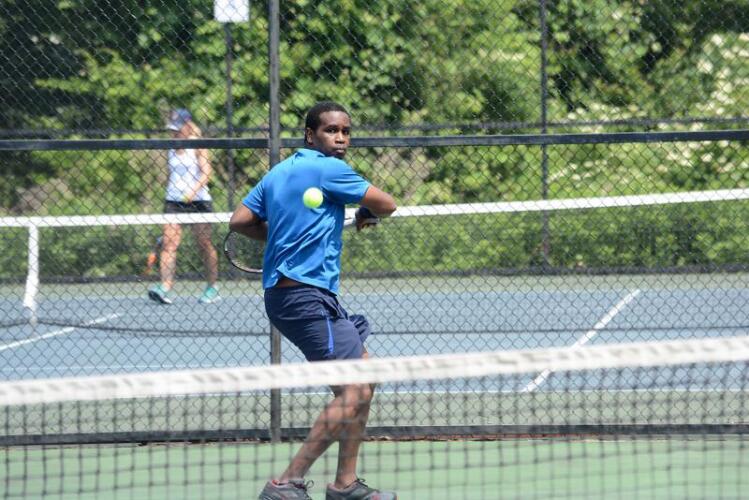 Shawn Joseph hits the ball back across the net. (Bee Photo, Hutchison) 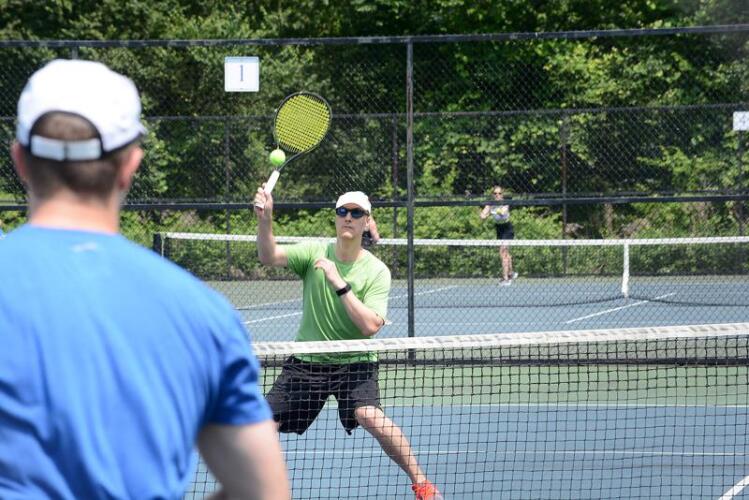 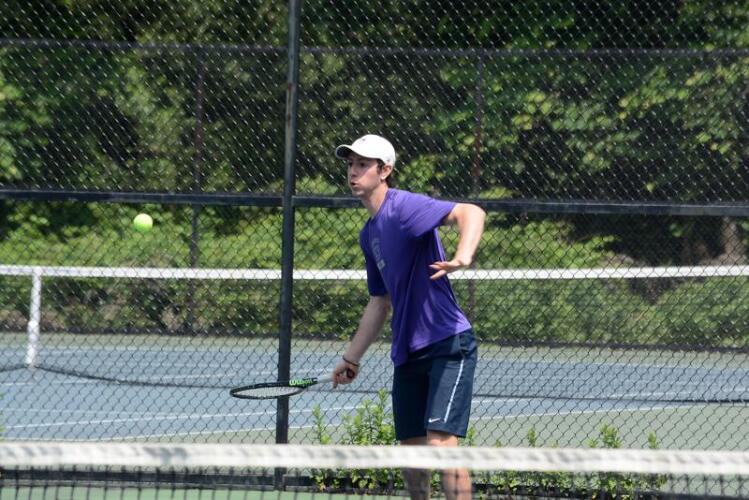 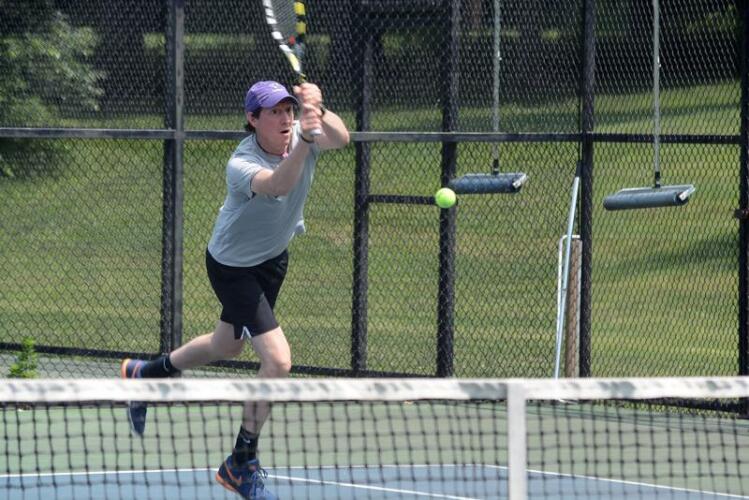 Tom Conrod sends the ball back to the opposition. (Bee Photo, Hutchison)

Competitive matches unfolded in the once-annual, back-again Newtown Tennis Open at Dickinson Park and Newtown High School during a pair of perfect weather days, June 22 and 23. There were close to 100 participants, and eight division champions were crowned in the revived tourney, which was a regular event up until 2008, and was held again in 2017.

Organizers Habby Farah and Brett Teolis have plans to make this an annual happening once again and were pleased with the level of participation in its return as 94 adult participants of varying ages filled play-level-based divisions.

Participant Helen Brickfield, business development manager for Newtown Chamber of Commerce, pointed out that the tourney was a great way to bring the community together.

“This is one of the things that makes Newtown so special. They come up with an idea, they put it out there, and it happens,” Brickfield said.

In addition to the organizers making it happen, Mother Nature allowed for the matches to be played as scheduled with bright, sunny skies, accompanied by low humidity, following a mostly wet stretch of weather.

“We have a nice mix, a nice group of people. It looks like they’re having fun. That’s what it’s all about — having fun and playing tennis,” Farah said.

“It’s a social event as much as it is a competitive tournament,” Teolis added.

There were singles and doubles matches. Some of the tandems included individuals partnered by event organizers, and there were parent-child combinations, husband-wife teams, sibling pairings, and friends duos.

“It’s just great seeing the revival of the Newtown Open. You’re seeing a lot of familiar faces,” said John Reisert, who won the men’s open singles championship and also teamed with his daughter, Gabby, to compete in a doubles bracket. This was the first time they played together, and Gabby’s first time competing in a tournament.

“Super excited to play. I’m glad Newtown has this in town. You don’t have to travel. I have a great partner I met from my USTA (United States Tennis Association) team,” said Amy Krompinger, who went on to partner with Meghan Logan and win the Women’s B doubles championship.

In the Women’s B singles bracket, Kim Nyklicek was the runner-up and Maxx Zimmer earned the championship.

Women’s A doubles runner-up players were Marie Vongsouvahn and Lillian Hope, and the champs were Louise Scrivines and Cindy Mahoney.

Women’s B doubles runner-up participants were Sylvia Islam and Karen Hanley, and the champs were Amy Krompinger and Meghan Logan.

In the Women’s C doubles bracket, Michelle Rankin and Heidi Verdi reached the finals, and the champs were Yumiko Hawke and Jackie DeFlumeri.

Mixed Open doubles runner-up players were Doug Frattaroli and Julia Frattaroli, and the winners were Maria Negron-Lombardi and Michael Lombardi.

Men’s Open singles runner-up was Alex Copp and the champ was John Reisert.

Men’s A doubles champs were Nick Hatcher and Brian Hatcher, and the runner-up tandem includes Joey Conrod and Tom Conrod.

In the Men’s B doubles competition, runner-up players were Wayne Curtis and Lou Luciano, and the winners were Bill Mangillo and Arnaud Tolleter.

Proceeds from the event will go to Newtown youth tennis players in need of financial aid to play tennis during the summer. Families in need of assistance should contact Newtown Social Services Caseworker Jacqueline Watson at 203-270-4330 for information.